"STRANGER THINGS PRO (Stern) Pinball Machine" has been added to your cart. 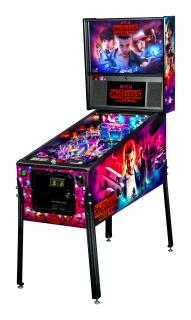 The Stranger Things game is licensed from Netflix. Its game play evolves around the #1 watched streamed TV Show worldwide, viewed in 190 countries. Our game is based on Netflix’s first 2 show seasons, the 3rd season having been recently released. Season 4 will be released next year.

On the Premium and LE, we replace the target, ramp and other art with white screen material. A first ever, Stanger Things uses a video projector to display more show video, instructions, drop target letters on the ramps, targets, playfield. Fantastic for a Sci-Fi game based in such a mysterious show. When the Premium/LE player spells WILL RUN! with the memory resettable drop targets, the ramp comes down to expose the even better, powered shaking Demogorgon. Add to all of that, on the Premium/LE back panel is the gravity defying magnetic Telekinetic multiple ball lock. Shoot the left ramp to jump 1 – 2 - 3 balls on to the magnet. All of this is augmented with Stranger Things show film clips, Stranger Things show theme song, rendered LCD graphics, and speech by actor David Harbour (Police Chief Jim Hopper).