"STRANGER THINGS PREMIUM (Stern) Pinball Machine" has been added to your cart. 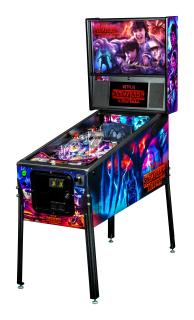 Stern STRANGER THINGS is based on Netflix’s first 2 show seasons, the 3rd season having been recently released. Season 4 will be released next year.

On Premium and Limited Edition models, the target, ramp and other art are replaced with white screen material. STRANGER THINGS uses a video projector to display more show video, instructions, drop target letters on the ramps, targets, playfield screens. This first ever pinball feature provides fantastic effects for a Sci-Fi game based in such a mysterious show.

When the Premium/LE player spells 'WILL RUN!' with the memory reset drop targets, the main ramp descends to expose the more exciting, powered shaking Demogorgon monster.

Additionally, the Premium/LE back panel includes a gravity defying magnetic Telekinetic multiple ball lock. Shoot the left ramp to jump 1 – 2 - 3 balls on to the magnet.

260 lb
Product is out of stock