"CPU/Sound Board component update kit" has been added to your cart. 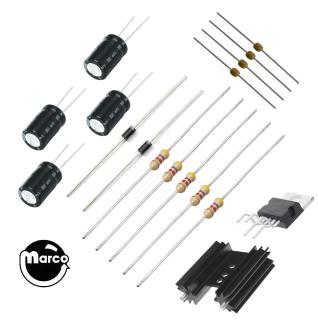 Many Sega Pinball machines had their manufacturing costs reduced by omitting one of the sound channels from the CPU / Sound board. The sound portion of the circuit board was left with one amplifier "un-stuffed" with electronic components. The design philosophy was that stereo sound wasn't necessary for operation in busy street locations.

Now that many of these machines are in collector's homes, stereo sound can again be appreciated by installing this kit.

1996-1998 Sega Pinball games from TWISTER through to and including VIPER NIGHT DRIVIN' had only the left side backbox speaker and the lower cabinet speaker. The additional speaker is available separately as listed below. Only two of the 3 audio amp circuits are populated on the CPU board. These games are:
1996-04 TWISTER
1996-07 INDEPENDENCE DAY
1996-12 SPACE JAM
1997-03 STAR WARS TRILOGY
1997-06 THE LOST WORLD JURASSIC PARK
1997-09 X FILES
1997-12 STARSHIP TROOPERS
1998 VIPER NIGHT DRIVIN'

Late Sega and Stern Pinball games from LOST IN SPACE onwards have two backbox speakers but they are effectively mono as they are both connected to the left channel audio amp on the CPU board. The right channel amplifier circuitry is un-populated. These game are:
1998-05 LOST IN SPACE
1998-06 GOLDEN CUE
1998-08 GODZILLA
1999-02 SOUTH PARK
1999-09 Sega HARLEY DAVIDSON®