"AVENGERS INFINITY (Stern) Pinball Topper" has been added to your cart. 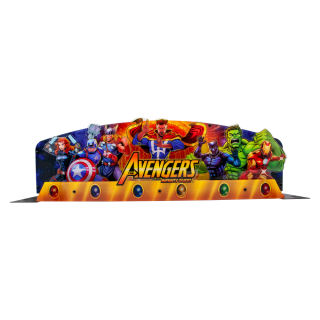 Collect your gems to defeat Thanos and bring order back to the Marvel Universe. This official Stern Pinball topper tops off your Avengers Pinball and really ties it all together. Fits all models - Pro, Premium and Limited Edition. Here's how it works:

To start the Pinball Topper Mode:

Collect all 6 gems featured on the Pinball topper during normal gameplay. Each unlit gem you collect will light up on the pinball topper when collected. Once the 6th gem is collected, the mode will start immediately before releasing the ball from the tower up post.

Each gem you collect on the pinball topper is progressive and carries over from game to game for all players. Whoever is lucky and skillful enough to collect the proper gem starts it. Once the mode is started, all pinball topper gems are un-lit until the next time they are all lit again. Topper gems are also non-volatile, they will carry over even if you power off your game.

Features a dynamic randomly generated mode name! Could be Gem Mania, but also can be Stone Frenzy, or Rock Craze, or Elemental Delerium. This is randomly generated from two lists of names. Although the mode name is completely random, the mode itself has the same rules regardless of the name it gets.

11 lb
Product is out of stock