"DEADPOOL PRO (Stern) Pinball Machine" has been added to your cart. 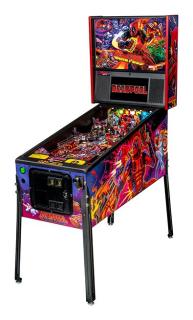 The merc' with a mouth is back in Stern's DEADPOOL pinball machine! Players will be immersed in the Deadpool universe, teaming up with iconic X-Men characters Wolverine, Dazzler, Domino, and Colossus as they battle against infamous villains Juggernaut, Sabretooth, Mystique, Sauron, and Mr. Sinister. Players will also tag along with Deadpool on his time machine quests as he battles against the T-Rex and the Megalodon. DEADPOOL designers testify!

Each game features a 3-bank drop target with a ball lock that's guarding a custom molded Lil' Deadpool bash toy target. All models include two stainless steel and wireform ramps with a Katana Sword ramp return. DEADPOOL pinball entertains with an amazing array of ninjas, vampires, and chimichangas, making it suitable for all skill levels.