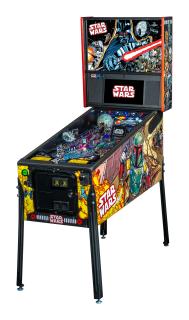 The first version of Stern's STAR WARS had cool original compositions on its side art and backglass, but it featured a lacking, photo-real art scheme on the playfield that just didn't feel very Star Wars. Despite the great gameplay, movie clips, and fantastic sound, the original art package held STAR WARS back from being truly great. The Comic Art version remedies this. Based on the original SATR WARS Trilogy – Episodes 4, 5, and 6. These episodes remain the most popular in the STAR WARS universe.

Available in Pro, and Premium models.

In pinball machines, the playfield is where the action is, and there is a lot of game on these playfields. In addition to the playfield screen, all versions have a 5-target drop bank, Death Star model, interactive Tie Fighter model and 16 multicolor LED’s to guide players through super speed, loop and scoop features. Player selectable multiball, 16 missions, 9 multiball modes, changeable red-white-blue general illumination LED’s, and more are player options.

Although designed with the same basic playfield layout as the Pro, the STAR WARS LE and Premium models have significantly enhanced features and devices. Experience the Hyperdrive magnetic ball accelerator speeding multiballs around the all metal ramps. The LE/Premium edition Death Star explodes to release balls locked for multiball. Added to these Star Wars ships is the LED lit Millennium Falcon (which is available as an accessory for the Pro).

Each version has a distinct art package. All are great hand-drawn STAR WARS designs. The LE is themed 'Millennium Falcon', the Premium for 'The Dark Side'. To add to the distinction, the LE comes with laser cut side armor and all 3 backglass versions.

Reference:
300 lb
Product is out of stock