"SPIDERMAN VAULT (Stern) Pinball Machine" has been added to your cart. 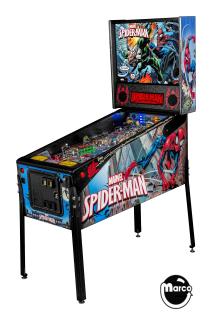 Stern has opened the Vault for the re-release of SPIDERMAN™ V.E.

Inspired by the Marvel Universe Comic series, Spider-Man Vault Edition is an update of the pinball classic. The game features all-new art, animation and sound packages based on the legendary Ultimate Spider-Man comic series.

The Ultimate Spider-Man is a superhero comic book series published by Marvel Comics from 2000 to 2009. The series is a modernized re-imagining of Marvel's long-running Spider-Man comic book franchise as part of its Ultimate Marvel imprint.