"IC - Data East PIA Test Eprom" has been added to your cart. 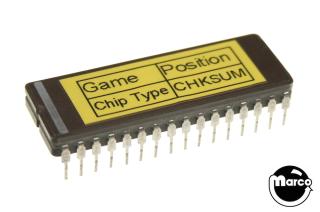 Below are the flash codes.
Completion of a flash means the associated chip has passed the diagnostic test. For example, if the LED flashes four times then stays lit, chip 11D would be bad.

There is a long pause after flash one only. After all eight flashes, the EPROM will pulse all coils, lamps and flasher bulbs in the game, one at a time in succession.

The test ROM for Data East CPU boards has the following functions. When the Test ROM is installed into a CPU board and power applied, the CPU will perform power-up self tests and then immediately go into burn-in cycles with no intervention. It is not required that the Test button be pressed in order to initiate burn-in cycles.

The power up self-test will check major components on the CPU board and flash the LED as each one appears normal. If any fail, the LED will stay on. The tests consist of a checksum test of the ROM and read/write test of the RAM and the PIA's. The PIA test will NOT check both sides of all PIA's since certain PIA ports are designed to be inputs and the loading on those ports will determine the data seen by the CPU. However, those ports designed to be outputs will be written to and read from in order that basic go/no-go functionality can be checked.

1 oz
Product is out of stock