"WALKING DEAD PRO (Stern) Pinball Machine" has been added to your cart. 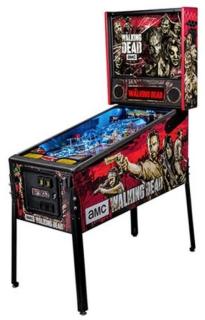 AMC’s The Walking Dead, the most watched series among adults aged 18-49, is based on the comic book series written by Robert Kirkman and published by Image Comics.

The drama tells the story of the months and years after a zombie apocalypse. Stern’s THE WALKING DEAD pinball features everything fans would want in a flesh-eating pinball world.